I'm pretty sure that every male aged below sixty devoured Herge's Tintin series throughout their formative years.

The sense of adventure, strong moral compass and insatiable curiosity had me hooked. Tintin and the Broken Ear. Tintin in America. And: Tintin in the land of Black Gold. Stranded the dunes: a portrait of a rolling ocean, painted in sand - stretching beyond the shimmering horizon.

I've been captivated by dunes ever since. Endurance racing along the pistes of the African Paris - Dakkar had brought me to Morroco's Merzouga dune - dominating in size, complete with camels silhouetted on its crests against a rising sun - but not the dunes from Tintin. We'd attacked 18km of dunes in Mauritania - a glipse into an apocolyptic world. Winds suspended the fine grains in the air, imposing an omnipresent orange fog around us and blotting the sun. The soft sand swallowed our motorbikes, sapping our energy and morale. Hours later, we emerged with only 1 litre of fuel to spare. Formidable dunes, but not the dunes from Tintin.

Now, I found myself in Tunisia - again for enduro biking. We'd spent days riding closer to the edges of the Sahara, and after hours of blasting across powdery fesh-fesh, we were presented with a vista of dunes, swelling around a rocky spur that rose several hundred metres above where we now were. Over the course of an hour or so, we battled the dunes; sliding off ridges, stalling the engines as the inclines became to steep, elation turning to terror when breaching the ridge of a dune turned into a plummet on the other side.

Eventually we abandoned the bikes and assaulted the outcrop. The final dune resisted, each step causing a cascade of liquid sand that disappeared from below my feet, causing my to slide back. Finally, after climbing on all fours, I arrived, embarassingly exhausted at the top. Stretching before me, an uninterrupted panorama of dunes, rising and falling beyond the horizon. I had finally found the dunes of Tintin.

That night, I snuggled my bivvy in between some dunes, and to the lullaby of celestial magnificance above, fell asleep. The next night, by an oasis I found an incomplete room on top of a hotel, and had some of the best sleep I've ever had. 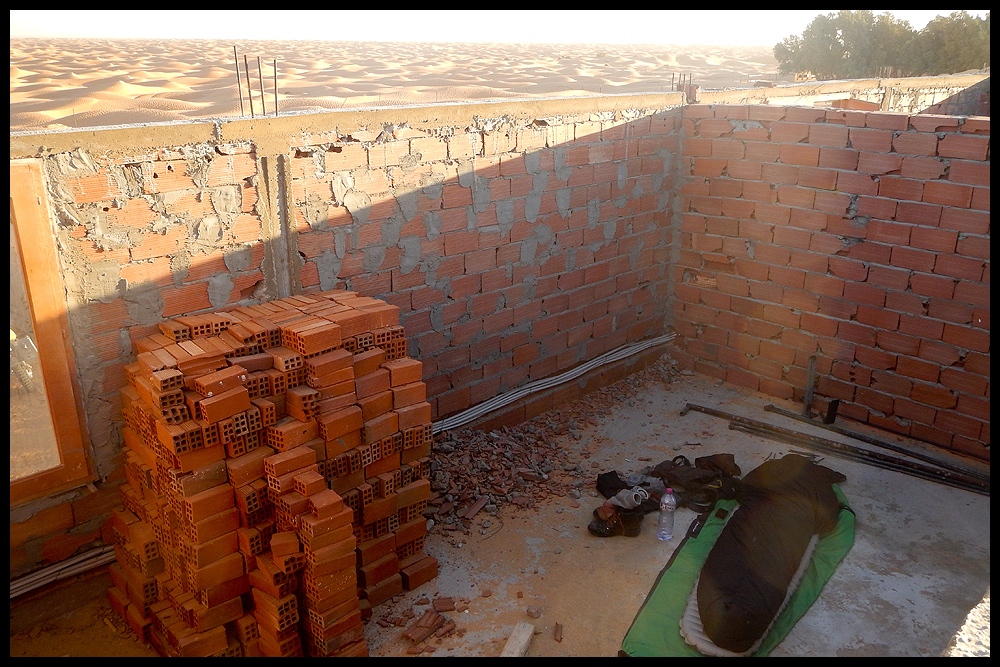 Logistics to return home were rendered complicated due to having to travel with our bikes, so we'd opted for a ferry from Tunis to Genova. Somewhat unfortunately, the already long voyage was almost tripled to bad weather. Never mind; equipped with a street-sweeper bristle and paperclip, the nightclub / VIP bar on top of the boat, once off-limits, was now, much to our delight, transformed into a private event - ours - after which I curled up on the very plush sofas until the sunrise over the ocean woke me.

First time I've ever left a nightclub at 8AM in the morning.